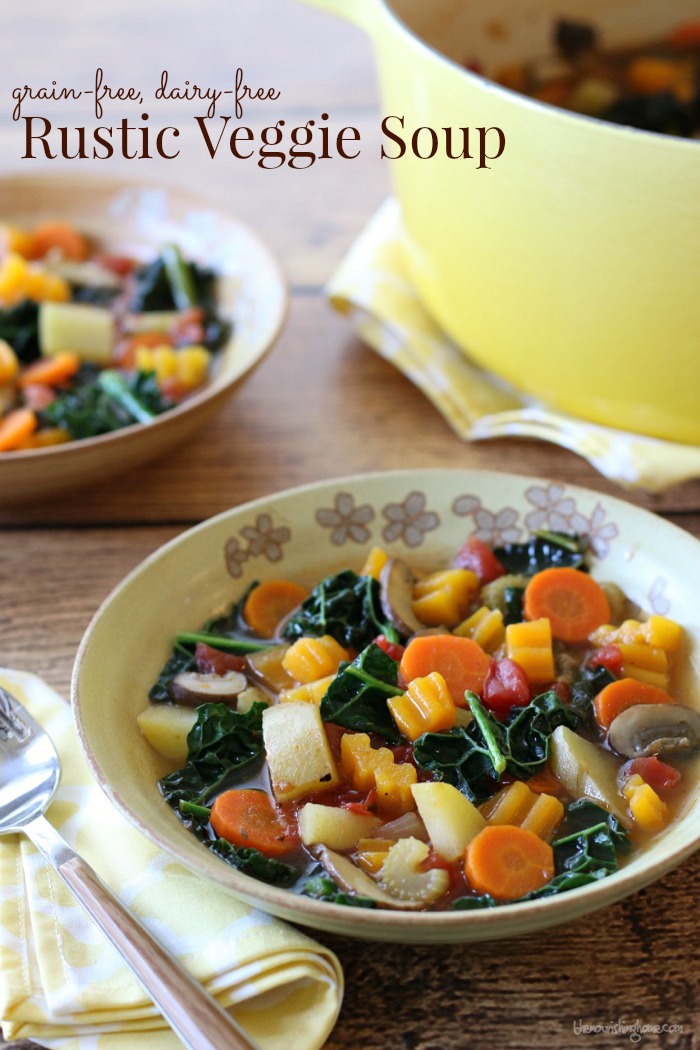 The perfect comfort food on a rainy day or chilly winter’s night, this Rustic Veggie Soup is a colorful rainbow of healthy, savory flavor. This simply scrumptious soup makes it easy to enjoy your veggies, especially when you toss in some leftover roast chicken or pulled pork. Or one of my personal favorites, leftover spicy grilled shrimp. (Wowie, it’s so good!)

Bonus, it’s so easy to make! All it takes is a little chopping and simmering, and in less than 30 minutes, “Soups On!” To save time, I like to use pre-cut butternut squash. My local Trader Joe’s has adorable crinkle-cut butternut squash that makes the dish even more appealing. I also use pre-cut organic kale; a big bag from Costco makes it easy to use for this recipe and more! 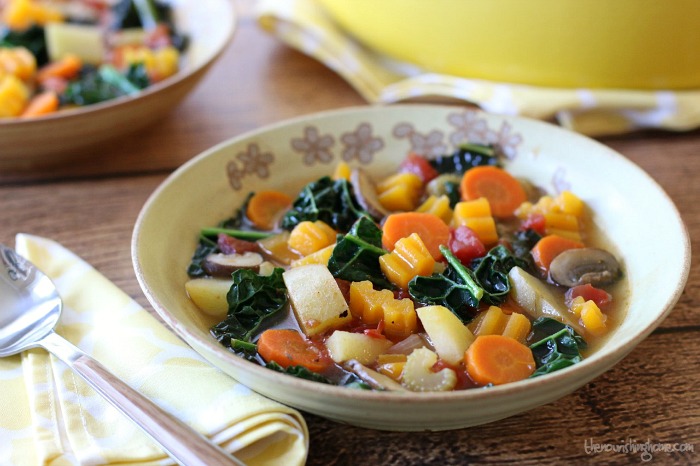 This tasty, hearty meal is definitely a family favorite, which is why you’ll be seeing this recipe in my meal plan rotations over at The Better Mom blog.

P.S. The beauty of this recipe is also its versatility. The fire-roasted diced tomatoes paired with homemade chicken stock and a classic mirepoix of diced onion, carrots and celery form a flavorful base from which you can add your favorite seasonal veggies for a delicious soup personalized for you! 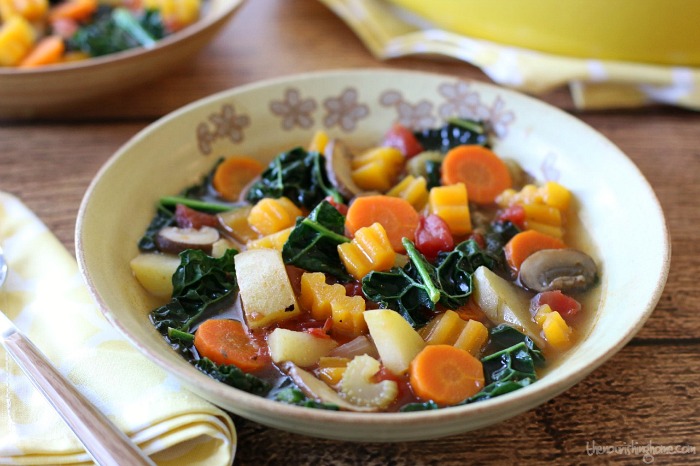 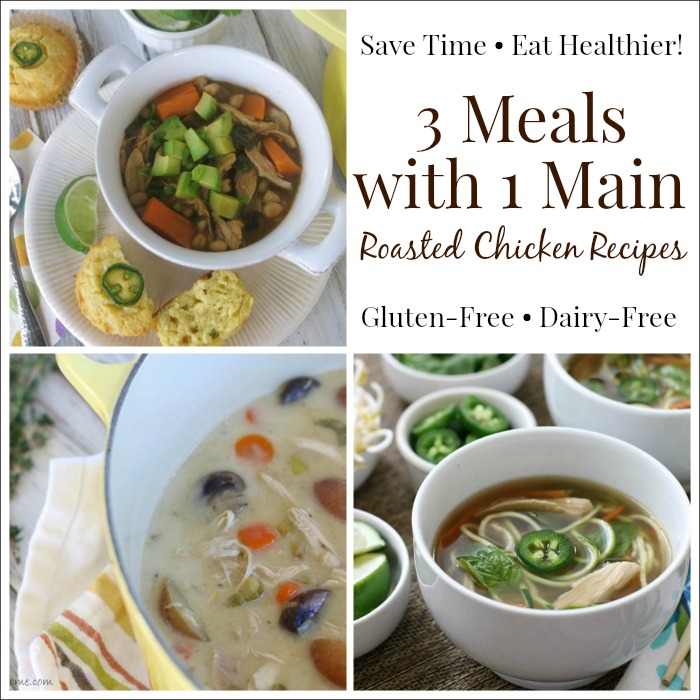 Welcome to Part One of a delicious new recipe series … 3 Meals with 1 Main Dish!

As we all know, one of the biggest challenges to maintaining a healthy whole food lifestyle is time! That’s why I’m excited to launch this helpful series featuring one of the easiest “Cook Once, Eat Twice or More!” strategies for saving time in the kitchen – batch cooking!

Batch cooking is simply making a large quantity of a particular food and using it to make multiple meals. This week, we’re putting this awesome time-saving strategy to work with my favorite Slow Cooker Roast Chicken. 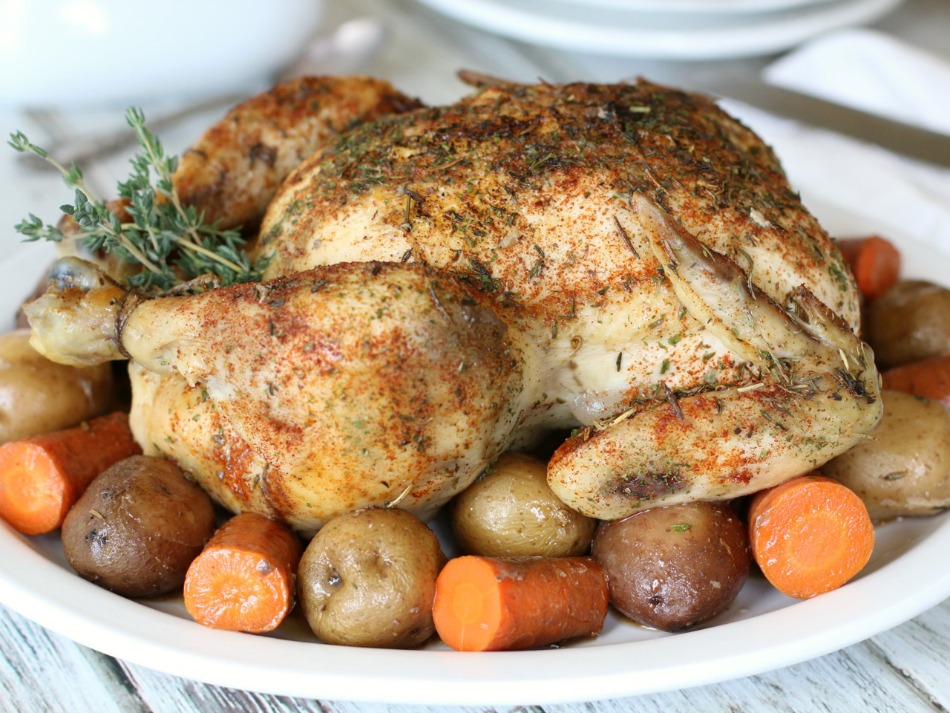 When it comes to slow cooking a whole chicken, I’m all about getting the biggest bird I can afford (and will fit in my slow cooker). Cooking a big bird means lots of meat for making quick-n-easy weeknight dinners like the ones featured below.

Of course, this easy Rotisserie-Style Slow Cooker Chicken makes a delicious dinner paired with a bed of garlic-infused root veggies. However, I frequently slow cook a whole chicken on the weekend for the sole purpose of saving the meat for future meals, since a 6-pound whole chicken yields about 7-8 cups of shredded meat! Plus, it’s so easy to toss the bones back into the slow cooker to make a nutritious bone broth perfect for soups, stews and more! 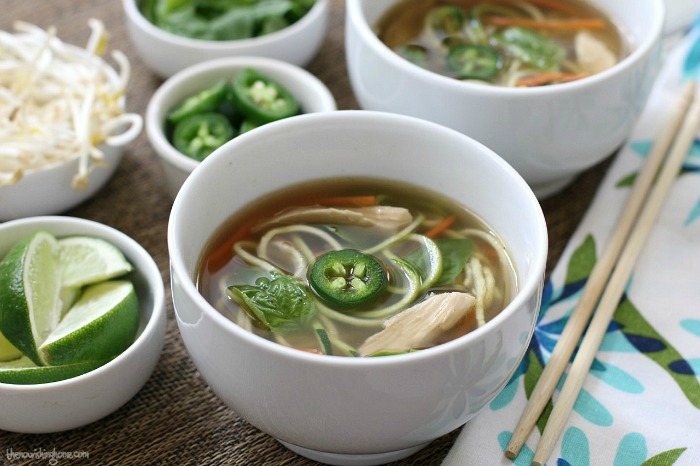 Chicken Zoodle Pho Bowl – A symphony of fresh flavors! This rich broth paired with roast chicken, fresh herbs and a squeeze of fresh lime – along with the slight heat of jalapeño slices and the crunch of bean sprouts, zoodles and shredded carrot – is truly amazing! 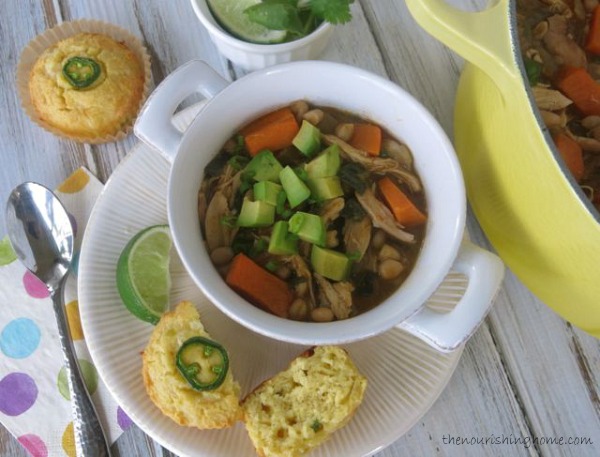 Roasted Chicken Chili – This tasty chili-style stew is a great way to use roast chicken, and is packed full of spicy, yet mellow flavors! To make this delicious chili Whole30-friendly, simply omit the white beans and add diced zucchini and/or sweet bell pepper instead! 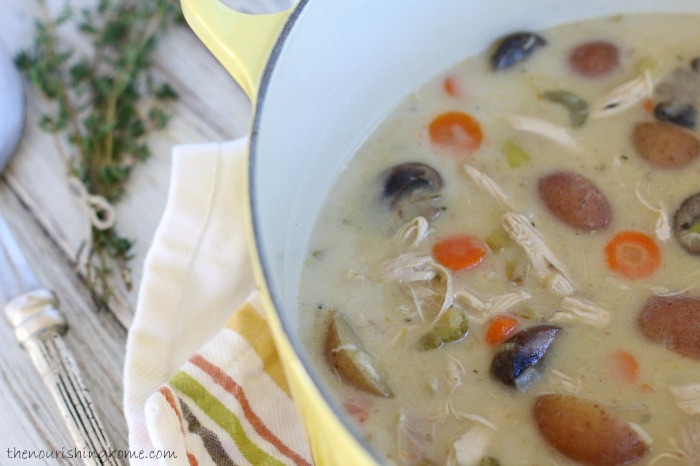 Creamy Chicken & Veggie Soup – This easy one-pot meal is another delicious way to use shredded roast chicken (or turkey). This recipe also reveals my secret for achieving a creamy, rich flavor without using a single drop of dairy.

Even more easy and delicious ideas … Roast chicken is so versatile, which is why it’s an easy option for creating a whole host of delicious, healthy meals! Here’s a few more of our favorites:
• Chicken Salad Wraps – fresh greens wrapped around a tasty chicken salad filling.
• BBQ Chicken Sliders – mix shredded roast chicken with your favorite BBQ sauce (if you’re doing Whole30, be sure to use a Whole30-compliant BBQ sauce) and serve it on top of tasty Sweet Potato Buns.
• One-Skillet Savory Chicken – save time by tossing in leftover shredded chicken in this simple one-skillet meal! 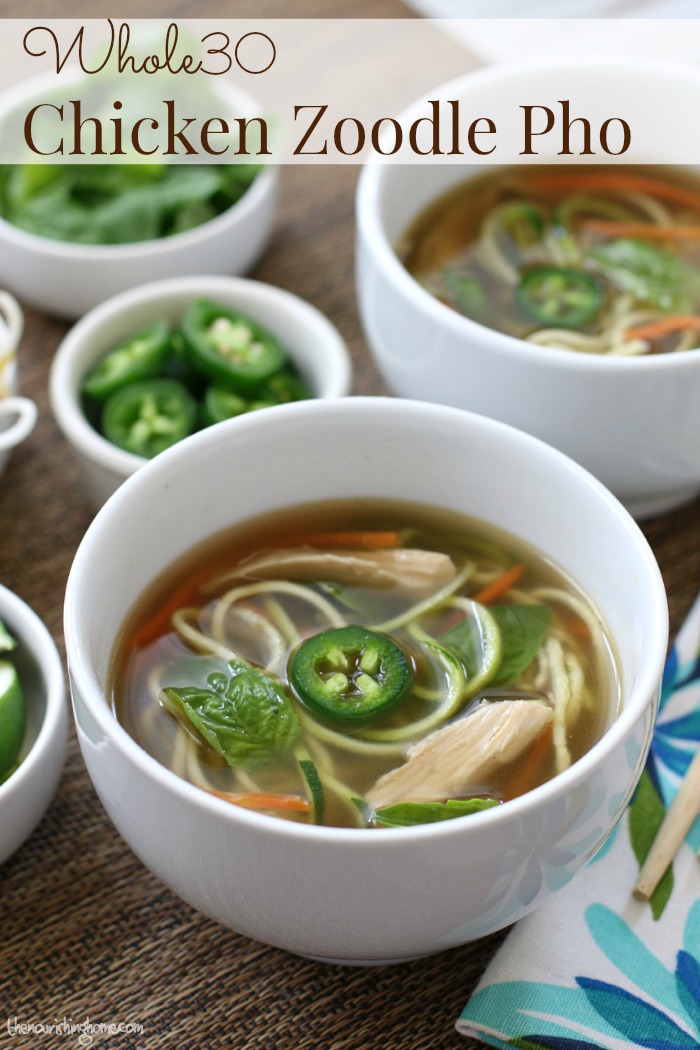 I’m sure my family isn’t alone in verbally expressing our passion about certain foods, sometimes to the point of trying to winningly convince each other that our favorite, really is THE best food EVER!

The debate usually starts over dinner with someone asking … “If you were stranded on a deserted island and could only have X number of foods, what would they be” …

Each of us takes a turn, not only expressing what foods we’d choose, but why. Of course, I always try to make a convincing argument about the nutritional value of my chosen foods. While some people (I’m not naming any names), lean toward foods they think taste awesome, but in my opinion would most likely mean they’d be facing scurvy, or some other scary sounding ailment that comes from a lack of nutrition. (ha!)

All this to say, “Pho Ga” is a definite must-have on my favorites list! Once you’ve tasted it, it’s hard not to crave this flavorful bowl of broth packed with delicious and nutritious accompaniments.

Although my Whole30-friendly version of pho isn’t strictly authentic, I do use pre-made homemade chicken broth and leftover shredded roast chicken, which greatly reduces the cooking time while still giving this soup a rich depth of flavor.

Another time-saver is to double the pho broth portion of this recipe, and then freeze the extra broth in individual portions. This makes it super easy to toss the frozen pho broth into a saucepan and let it heat up while you pull together the additions. Talk about a quick-n-healthy meal! 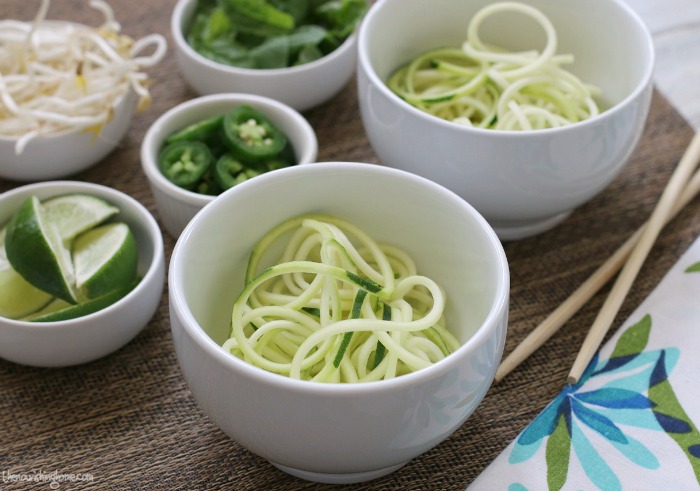 Since rice noodles are off the table when I’m Whole30-ing … it’s zoodles to the rescue! Since zucchini noodles keep well, it’s easy to save time by spiralizing the zucchini a few days in advance. (Simply store zoodles in the fridge in an airtight container with a paper towel to absorb any excess moisture.)

When using zoodles, there’s no need to steam them in advance since the hot broth will cook the zoodles to a nice al dente consistency in a matter of a couple minutes. This means you can simply add the raw zoodles your bowl and pull together the rest of the accompaniments while your pho broth is cooking. Then when the broth is done, you’re ready to put it all together! 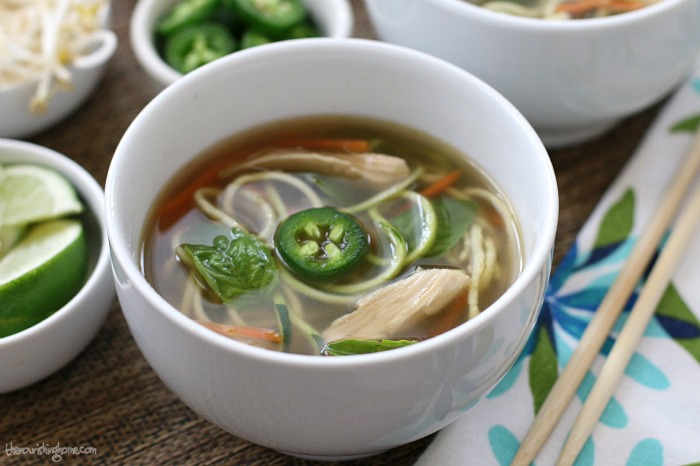 How to enjoy pho!
When it comes to pho, it’s all about the accompaniments, so don’t skimp on loading-up your bowl! In addition to the traditional favorites, I like to add a bit of raw shredded carrot and sliced green onion.

Chicken Zoodle Pho is such a symphony of flavors – the rich broth paired with fresh herbs and a squeeze of fresh lime, along with the slight heat of jalapeño slices and the crunch of bean sprouts, zoodles and shredded carrot – it really is amazing! I can’t express the joy and heartwarming satisfaction that comes from a savory bowl of pho! Enjoy!

For the broth
For the soup
Recommended toppings

Time-Saving Tip: Double the pho broth portion of this recipe, and then freeze the extra broth in individual portions. This makes it super easy to toss the frozen pho broth into a saucepan and let it heat up while you pull together the accompaniments. Talk about a quick-n-healthy meal!