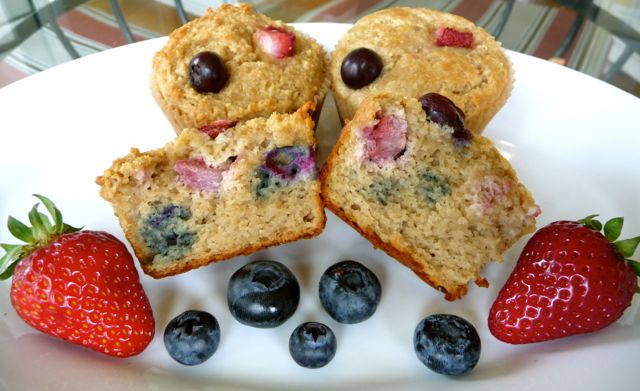 In the left corner, brand A and in the right corner brand B. As you can see, brand A is somewhat coarser in appearance, whereas brand B is smoother. In addition, brand B rose slightly more to produce a lighter, fluffier baked good. But the real test is taste! Can you guess who’s the winner?

I have not yet compared Bob’s super-fine grind almond flour to Honeyville’s. But plan to do so in the future and will come back to update this post further. In the meantime, this comparison of almond flours still holds value since there are many blanched almond flours being sold since the grain-free lifestyle has become more popular.

However, it’s important to note (as this post shows) that only those flours with truly super-fine grinds will perform best for grain-free baking. This is particularly important if you’re making recipes from my Grain-Free Baking Cookbook or any of the grain-free baking recipes from this site, since I specifically use a super-fine ground almond flour for all recipes I develop and share. So for best results, I recommend sticking with super-fine ground blanched almond.

Until recently, I would have told you about my tried-n-true friend Bob – you see, I’ve been using Bob’s Red Mill blanched almond flour for more than a year now (*aff.link). Why? Because it’s available through my Azure Standard co-op for a super great price. And if you’ve shopped for blanched almond flour, you know what I mean. This stuff ain’t cheap!

But recently, a friend of mine (Renee) decided to wander off the beaten-path and give Honeyville Grains blanched almond flour a try (*aff.link). She immediately emailed me suggesting I do a head-to-head comparison of the two. Brilliant idea! In fact, this had all the makings of a great regular segment!

In order to determine a winner, I decided to base the competition on three specific qualities: Taste, Texture and Performance. So, I chose three different recipes in order to test the versatility of the competitors’ products:
• Fluffy Little Almond Flour Pancakes
• Mixed Berry Muffins
• Our Favorite Chocolate Chip Cookies

Let the competition begin …
After carefully selecting a taste-testing panel of experts familiar with the taste and texture of almond flour (a.k.a. my family), I set-up a three day period to run the test. I informed my taste-testers that they would be judging between two different almond flour brands (not knowing which was which) in the areas of taste and texture. As the home chef preparing the recipes, I would be judging the two brands on performance. 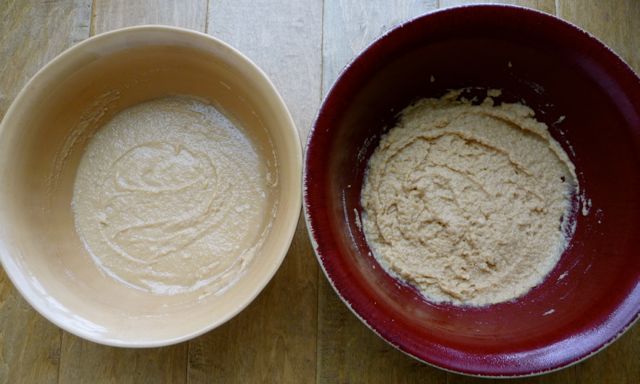 Almond Flour Pancakes
As shown above, I was surprised to find with the very first recipe I tried, a distinct difference right out of the gate. As I whipped up two batches of our favorite almond flour pancakes, keeping all ingredients the same except for the brand of almond flour, I immediately noticed that one of the batches appeared smoother and creamier in texture.

As the pancakes cooked side by side on the griddle (just to be sure that temperature wasn’t a variable), I was amazed again that one of the pancakes seemed so much fluffier.

I said nothing to my taste-testers, but served them one of each and asked them to judge the pancakes according to taste and texture. It was a unanimous decision. I later sat down and joined them in scarfing down the rest of the winning batch, making sure to let everyone know that come tomorrow, the second place batch would be served!
(Waste not, want not!) 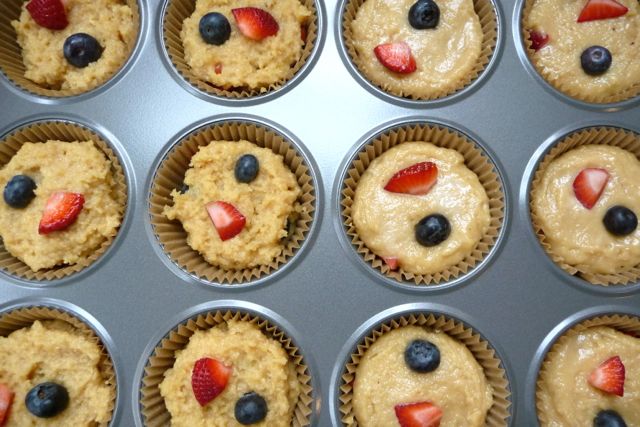 Mixed Berry Muffins
Keeping an open mind, I moved on to the muffin recipe test. I selected this particular muffin recipe because the dominant ingredient is almond flour – there’s not a lot of competing flavors, just the simple addition of some ripe organic fruit. What better way to test any significant difference in taste, as well as texture.

As shown above, I placed the competitors side-by-side in the muffin tin in order to rule out variations in baking temperature. Again, one batch rose to the top in terms of taste and texture, as well as out performed in producing a lighter and fluffier baked good. 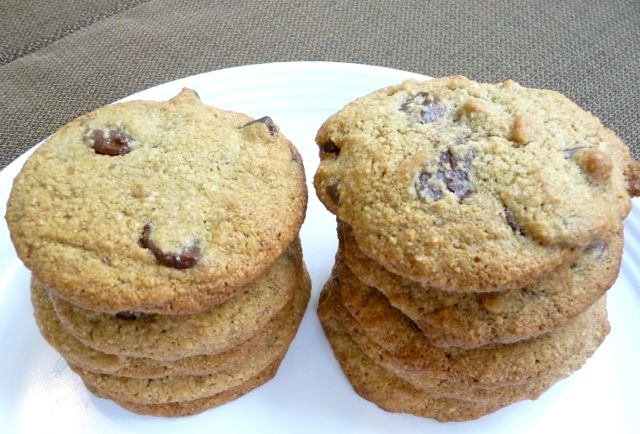 Our Favorite Chocolate Chip Cookies
Would there really be much of a difference in something as simple as a cookie? Well, it was amazing to find yet again, that yes, the brand of blanched almond flour used does make a noticeable difference, as evidenced above. Although this time, the taste difference was pretty negligible. However, the texture was definitely better with the same brand again – less mealy/grainy.

And the winner is …
Bob, you know “I love ya, man!” but you must concede victory. Without question, Honeyville’s blanched almond flour out performed in all three areas: Taste, Texture and Performance.

Overall, after comparing these three recipes, I found that the performance of Honeyville was consistently better in producing lighter, fluffier baked goods. As far as taste, in two out of three recipes tested, baked goods made with Honeyville’s blanched almond flour tasted better – they had a noticeable mild, sweet nutty undertone. And last but not least, the biggest difference we discovered between the two brands was that of texture! Honeyville’s blanched almond flour was far less grainy (mealy) in texture. So it’s apparent that Honeyville’s finer even grind results in a lighter, fluffier baked good, more similar in texture to baked goods made with a gluten-based flour.

So, here’s to you, Honeyville Grains, the first victor in our first-ever Test Kitchen Showdown. Congratulations and thank you for making a wonderfully fine ground, delicious almond flour! 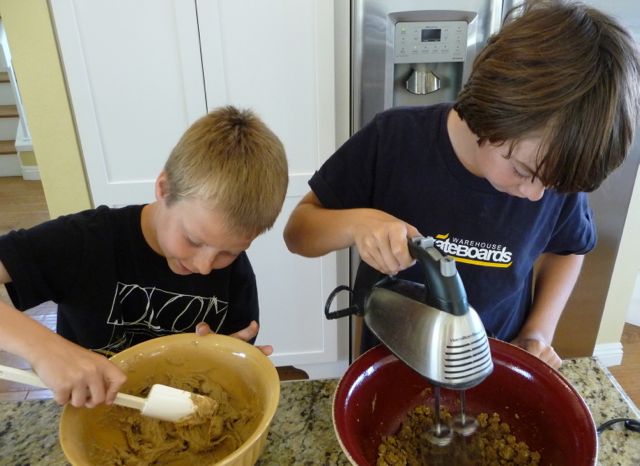 Whoever said “a little healthy competition is a good thing” is right!

SIDEBAR:  This “Test Kitchen Showdown” proved to be a fun opportunity to get my boys in the kitchen with me. I just used a few key phrases that made their ears perk right up – “battle between competitors;” “scientific experiment;” “chocolate chip cookies!” … Yes, I’m willing to do whatever it takes to get them cooking (or in this case, baking). LOL! But in all seriousness, I’m a huge fan of Kids in the Kitchen because the kitchen is a wonderful classroom, and cooking is a skill you can enjoy for a lifetime!
———————
Please Note: This was a completely unbiased test. I did not receive free or discounted product or compensation from either brand. This post represents my personal opinion after testing these two brands using three different recipes. Your opinion may vary, so I encourage you to give both brands a try and decide for yourself which you prefer.

Shop Around: Both brands sell their products via their websites and through other retailers and online sources. And although I have included *affiliate links to Amazon, I do recommend shopping around to find the best price. I also recommend not blowing your budget either. Remember, I happily used Bob’s Red Mill blanched almond flour for more than a year because it’s available via my co-op for a good price and it does produce a nice baked good.